In Tipping Point, Malcolm Gladwell observed how ideas, products, & messages can suddenly and apparently without warning reach a critical mass, and begin to spread rapidly like a virus.

In the right environment, he argued, small actions can have a dramatic impact. 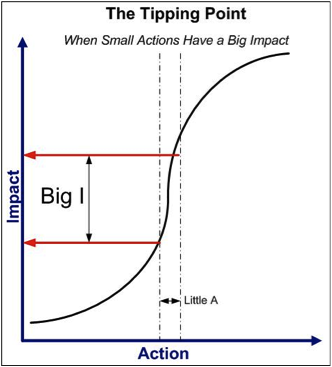 When a ritual takes hold it can become a social epidemic.

Growing up in the 1980s, I can recall the alarming percentage of teenagers that smoked because it became seen as a cool thing to do.

We could hardly claim unawareness that it was a bad idea, for knowledge of the detrimental effects was drummed into us from the very first year of junior school.

Yet because smoking became associated with maturity & sophistication, millions of us went right ahead and did it anyway.

Interestingly the use of the term ‘tipping point’ itself became an example of the phenomenon.

Used only sparingly until the publishing of Gladwell’s work, after the turn of the century the phrase could quite quickly be synonymous with almost any idea or craze that took off.

In 2012, BBC television even launched a dire game show of the same name, neatly marking the peak in its popularity (it was, after all, a really bad show).

These days, somewhat annoyingly, people are inclined to use alternative phrases such as ‘perfect storm’ & others.

You might not always agree with Gladwell’s theories, but if you treat them as conversation starters then they should definitely prompt you to look at the world differently.

Are there any practical lessons we can draw from the notion of the Tipping Point?

For investors there are some echoes here of the ‘law of the vital few’ or the 80/20 rule, which suggests that the bulk of your results may be achieved by a small number of actions.

Furthermore, when your investment portfolio reaches a critical mass you may find that it suddenly begins to grow much faster, as growth can lead to supercharged growth and your best investment results generate greater knowledge, strategies, opportunities, & ideas.

Arguably, though, the tipping point concept has more powerful implications for businesses.

If an idea or product of yours can reach and be adopted by a small number of highly influential people it might experience explosive growth & popularity, potentially spreading like wildfire (in recent times, for example, think of Zuckerberg, or the Winklevii twins & cryptocurrencies).

In a receptive environment, it’s possible to deliberately spread an idea or product like a positive epidemic, if you can find & then sell a message with a “stickiness factor” that resonates and instils a genuine belief.

If you operate in a small services business, for example, try to think of how you can create memorable experiences that can reach and improve the lives of influential people…& resolve to never, ever give up, for a huge breakthrough may be closer than you think.

Keep making small tweaks wherever possible or necessary, while continuing to grow your business through referrals & promotion.

Since Gladwell first popularised the idea of the tipping point, internet use has exploded and become a phenomenally powerful tool, and in turn this presents you with a wonderful opportunity to connect your most inspired ideas with influential people. 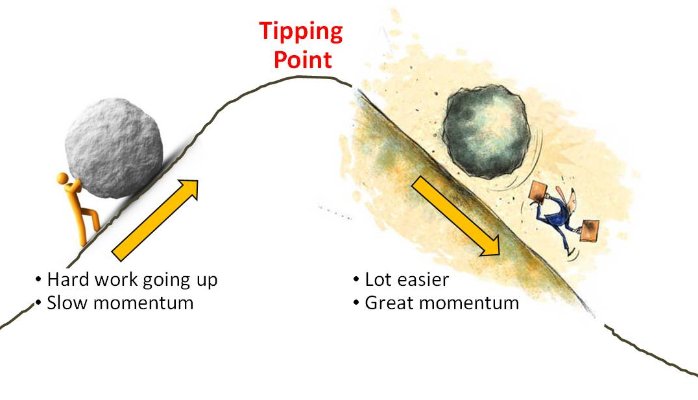